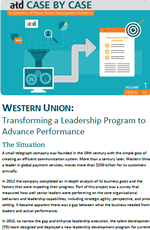 A small telegraph company was founded in the 19th century with the simple goal of creating an efficient communication system. More than a century later, Western Union, a leader in global payment services, moves more than $150 billion for its customers annually.

In 2012 the company completed an in-depth analysis of its business goals and the factors that were impeding their progress. Part of this project was a survey that measured how well senior leaders were performing on the core organizational

The ATD Case Study Team sources, writes, edits, and publishes proven talent development solutions. They can be contacted at casestudy@td.org